I visited the Winchester Mystery House in San Jose, California yesterday – a house with many rooms and many stories. The site is packaged with more than a whiff of the Hollywood haunted house spin. The house designed by spirits. The labyrinth built to confuse evil spirits with doors and staircases to nowhere, winding staircases and secret passages. The house of paranormal phenomena, where you may still feel the presence of Sarah Winchester and those spirits she thought never far behind. And a house where all the explanations given inevitably end in ellipses “we’ll leave you to make your own mind up folks…” 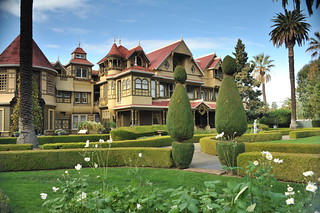 But the Winchester Mystery House has many more layers than this. It is an architectural pattern book of Victorian style. It is a monument to the many labours and crafts that produced it. It is an antidote to rigid design and ‘logical’ buildings (although Sarah Winchester applied different logics in its construction). It is the satisfaction of a previously frustrated architect’s desire to build. It is a physical manifestation of Sarah Winchester’s psyche and how she sought to deal with the tragic deaths of her infant daughter, husband and others close to her. And it is an attempt to make this conundrum engaging to modern visitors through ascribing mystery and intrigue, and the answers we append to all those ellipses.

What is so fascinating, though, is that the house is all these layers and others all at once. And is no different to anywhere else in this respect, simply a vivid example of this layering. I loved it.

Unfortunately photography inside the house is not allowed, but I took several outside.